Is It True that there is Significant, Unique and Out of the Ordinary Planetary Alignment on calendar day of July 4th? 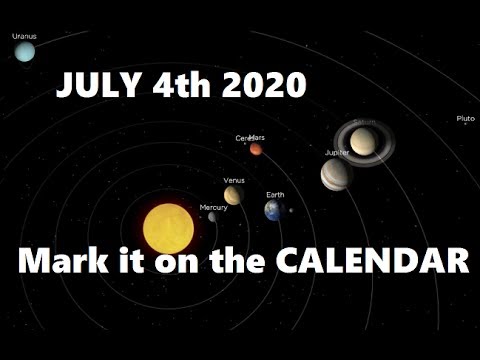 And what could it mean? How will it interact with the arrangement of planets described by my natal birth chart? Will I notice anything different or strange? Will I change as a person? Will humanity awaken to a new level of consciousness? Will the divine manifest itself more openly in our daily living? Will there be an earthquake? Will it be the end times? Will I hear fireworks and smell barbecue?

edit: I am disallowed to reply now. I was going to add a reply but instead I’ll just edit it in, that all my questions and this whole post was entirely rhetorical. I wasn’t asking for answers. Just expressing myself. Doing some Fe. I don’t know how it is for anyone else, but when I ask rhetorical questions I don’t think I’m looking for answers or analysis. In fact, when it happens, it is rather grating to experience someone missing the point like that. I noticed these things in other posts here, where I’m pretty sure someone was doing Fe expression and being rhetorical, asked some questions. And instead of saying “beautiful words” or “thanks for sharing that with us” people come in and just get right into dissecting the person like that was ever requested or required. But that could just be me, measuring things by my own self. I know I wouldn’t like it so I think I know? I guess? Maybe there’s all this context I haven’t seen.

NE waayyyyyy
I mean, ahem.
Anyhoo.
Who?
You.

You remind me of the babe.

There’s a lunar eclipse in Capricorn around 15 degrees. Probably just further developments surrounding current global health crisis and national political unrest. Eclipses usually mark turning points or major events, sometimes more obviously than others. Since it’s exactly opposite the sun in the “birth chart” of the USA, particularly relevant for that country. I haven’t looked into the specifics of the chart.

Check if you have any planets in the cardinal signs within five degrees of the eclipse point. That’s a good starting place for seeing how it will affect you.

I looked at your natal chart quickly, and just the degree of the eclipse, not the whole event chart.

The eclipse is at 14 degrees Capricorn. It conjuncts your Uranus/Neptune conjunction (1st house) and exactly squares your Jupiter in Libra, also Mars but not as tightly (10th house). Your moon is at 5 degrees (almost exactly the same as mine) so it shouldn’t really be affected.

Expect a change in idealized-self perception. Uranus/Neptune in the first will be a constantly shifting idealization of the self, particularly related to work/your impact in the world (Capricorn). That will then cause a motivational conflict with Jupiter/Mars in Libra (the sign of partnership/ balancing self and other) in the 10th (the house of career). The conflict will lead to a new way of doing things/taking action. Jupiter conjunct Mars can signify overdoing, and in Libra it would be overdoing to please others (or perhaps to please that idealized “other” form of you). Lunar eclipses are about release, marking an ending more than a new beginning. Change through letting go. I’ll leave you to connect the dots.

**edit
Because this is a lunar eclipse and the moon is opposite the sun, a t-square will be formed with Jupiter/Mars at the pressure point. So all the focus is here, that is where the output will occur.

Also this eclipse is the last in a 2ish year cycle that won’t happen again for 18 years. So it’s the culmination of whatever’s been going on with you ala these themes.

Oh my gosh you could be describing my husband’s predicament!

He’s just gone for severance after a long period of sorting through agonising conflicted feelings about his work (stay or leave, leave or stay) for the last couple of years, vs what he wants out of life next. It’s such a big leap for him, a big CHANGE with uncertainties lying ahead. Financial worries, but also drawn to the opportunity to move forward into a new chapter in our lives.

More nuance to all that that I can’t put into words just now but what you said resonated! Also with the lunar eclipse, time to let go of old embrace the new.

Hmm, maybe your husband has some similar placements going on? The above interpretation is specific to the transits to non’s natal chart.

to the opportunity to move forward into a new chapter in our lives.

Yes, this is always true of eclipses, solar and lunar. Lunar eclipses=taking out the trash to prepare for change. Solar eclipses=an actual new beginning, starting of a task, or at least the seed planted of a new idea. Unexpected events can occur at either kind, but the purpose of those events will be different.