LOL, no. Springster is you. I made it up for ya.

Could the black moon be the black of another type of moon instead of infj moon? Redemption and “we all have same-sized souls”.

The unforgiven song/video screams about not being able to be au natural…like having chains on you you need to break from to find the true self or tap into something largest. Break free.

Infj moon wants hell on earth?? Hmmm. Is able to experience hell? Does not run away? Kingdom of hell. Hell is a place that you can walk around in. It’s not quite as claustrophobic as you would think. Forge a path in hell.

I was also fascinated by the constant reference to some traumatic experience with the Mother.

Guess in the song it’s like the “pretty” faith is destroyed where it hits closest (mother).

But he had it rough. His father left them. His mother didn’t get treatment for cancer, died.

Such beginnings would make you angry and leave you feeling so impotent.
There’s a Netflix documentary about Metallica called “Some kind of monster”

Yes, James Hetfield is the black moon man in question. He didn’t write the song and I don’t know anything about the original writer(s) of the song, maybe they were black moon, but Hetfield and co. made that song one of the best I’ve ever heard is all I’m saying. That buildup to the main riff, and then THE MAIN RIFF, which is just sooooo fucking metal…if there was one riff that defined all of heavy metal I might give that one -sinister, menacing, chromatically backtracing as a last flourish. It is death and vengeance.

My mother was a witch
She was burned alive

And that tempo shift into a higher gear

And then it goes into a crazy frenetic guitar solo and then all of a sudden the bottom drops out and it just goes back into THAT RIFF again, slow and menacing and

You feeling me sistah? I think you need a dick to be into this shit.

And, for the record, St. Anger is Metallica at their worst artistically, as is Some Kind of Monster (which documents the St. Anger period).

I think you need a dick to be into this shit.

I don’t know about that but this video is awesome…so many dicks up on stage. 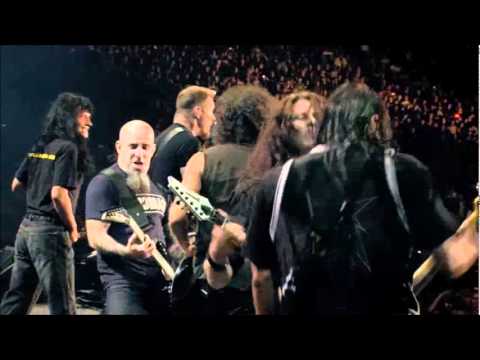 This topic was automatically closed 7 days after the last reply. New replies are no longer allowed.